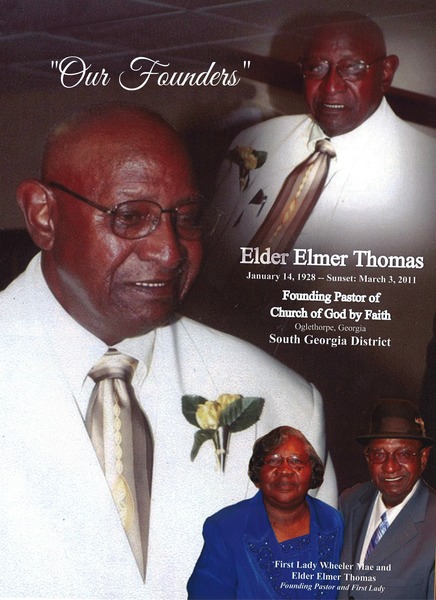 Oglethorpe Church of God by Faith

The stones that laid the foundation for the Church of God by Faith in Oglethorpe, Georgia started in a small town called Allentown, Georgia. Elder Elmer Thomas (then minister) and his wife Mother Wheeler Mae Thomas, along with Sister and Brother Charlie Colson (while attending church in Hawkinsville, Georgia) held services in the Stanley home in Allentown. However, that was just one stone along the way. Later, efforts were put forth in Perry, Georgia where a building was rented. The Colsons came less and Sister Jackie Whitehead joined the flock. Even though church was held there for several months, the foundation was not yet. Other stones had to be turned. Among those was Marshville, Georgia where service was held in Sister Crockett’s aunt’s home for a while. Although great work was done there, the foundation was still to come. A stone was laid in Chester, Georgia but no foundation. Ultimately, Elder Thomas was led to Oglethorpe, Georgia to Sister and Brother K.C. McKellar’s home where the ground was prepared for a solid foundation and the Lord truly blessed. Sister McKellar’s home where daughter and son-in-law (Mary and Robert Bullard) became part of the church. Also, Elder Tracy Spivey (then minister) became part of the church. Elder Tracy Spivey helped out quite frequently. Service was held on Saturday nights in the McKellar’s home. The word was the first feast, but afterward Sister McKellar made sure the table was spread and everyone could feast on bodily nourishment of good home cooked food. From her home, through the help pf Brother Bullard, and later on Elder Cannie Lester. A one room building was acquired; a very high ceilings, box type single room building.

Inside the church was almost demolished. The ceiling has a hole in it and the people were afraid that something would crawl out, such as a snake. The floor about mid-way the center aisle had holes in it as well and they were not covered with a mat. The windows had broken panes and even though they were closed, they were still opened due to broken panes. The doors were rotten, full of cracks and splitting, a good hit probably would have torn them down. However, no, matter what happened, church service was held each Sunday and Thursday night. Later Sister Mary Brown and her boys joined the flock.

The one room building had no bathrooms or running water, so after service the fellowship was usually cut short and the race would begin for Hardee’s or McDonalds or whatever place they could find to take a bathroom break. Finally, a portable outdoor bathroom was rented and the church was thankful, another blessing granted.

Outside the church, around the walls, was worse than the inside. The weathered boards were rotten and were falling off. There were holes on top around the sides and in the back. In the winter, the members had only one heater and since the ceiling was extremely high, not insulated and holey; they had a rough time trying to keep it warm. The members would bundle up really well and come to church but sometimes they would still get cold feet and hands, etc. During these times, they would crowd around that one heater to get warm.  There were times when Elder Thomas would bring his kerosene heater which helped a lot. Later, they were able to purchase another heater, God was still blessing.

In the summer, the building was just the opposite. It was really hot because the roof was tin and there was on insulation. The sun would beat down on the top of the ten till it was almost unbearable. The church could not afford to buy an air conditioner. No matter what kind of condition they face, they continued to have service and the Lord continued to bless.

As time went on, with the help of the God, the members were able to repair the building. The blessing continued to roll in and on March 17, 1992, they were able to make an arrangement that, instead of paying rent, they would use the money to make repairs on their building. Later, the building and two acres of land were given to them. The land had timber and they were able to sell the timber to add a porch and bathrooms to the church. As the years went by, they were able to remodel the building and extend it to add a choir stand and an annex. They were also blessed to have an individual to put a mural on the wall at practically no cost. Several years ago, they were able to acquire some padded pews from Abundant Life Church of God by Faith, Warner, Georgia. At the present time, more work is needed but they have come a long way, by the Grace of God. In December 2000 Laquanda Whitehead accepted her call to the ministry. She began working alongside Elder Thomas helping in the ministry in any way needed. It was later that he appointed her to be Assistant Pastor. He said that this was his decision and that he was doing what he felt he was lead to do. In later years, as Elder Thomas continued to work diligently in the ministry, being up in age, his health began to decline and Minister Laquanda’s responsibility began to increase. Minister Laquanda married Minister Stacey Grady in November of 2009. On Tuesday, March 3, 2011, Elder Thomas went home to be with the Lord. Minister Laquanda Whitehead-Grady carried on the ministry for three years and membership continued to grow. In December 2013, the Bishop and Ruling Elders Board of the Churches of God by Faith decided to appoint another pastor to the ministry of Oglethorpe, Elder Danny R. Patterson Sr. and his wife, Sister Vanessa Patterson. In January 2014, He took the reins of this ministry and is still serving as pastor.